Sara sent us to Costa Rica for a vacation. A break for her, as well.

Our first stop was Grecia, a little mountain town that Norris had heard was a popular ex-pat destination. A couple of years ago, we were thinking of moving to Ecuador for 2 years, but decided it was too far from home. So, then Costa Rica and Panama came up on the radar. Grecia was a nice place, with an ice cream shop just off the town square.

After dinner, we continued our trek to our first reservations at Villa Blanca, in San Ramon. The lodge is located in a cloud forest, and sure enough, as we turned off the main road, in the dark, the fog started drifting in and out. The GPS took us to a dead end first, but the man at the corner store redirected us the right way, down another curvy, dusty, rutted road. 20 or 30 min. later, we saw our first sign for the lodge and we were so relieved. Villa Blanca was worth the trouble!

I loved having an open fire place in the room. I got to sit by the fire in my pajamas and play with the flames without any mosquitoes. I did miss having some marshmallows, though.

Here’s the view from the front of our room.

And here’s what I saw at the back of the room the next morning. That’s a coatimundi. 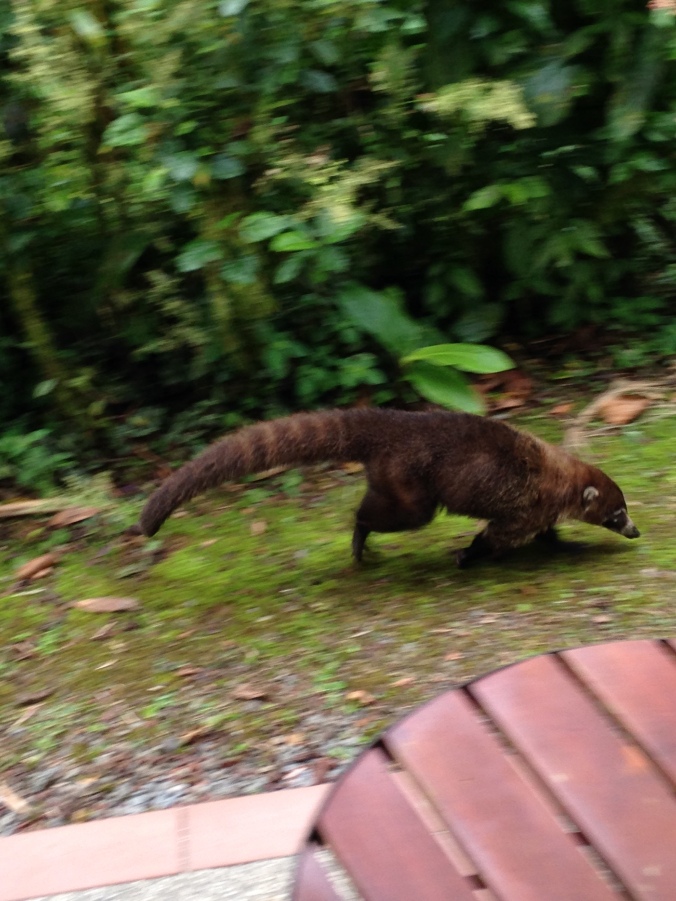 Norris went on a zip line tour while I went bird watching. I won. I got to see a Quetzal. This was the bird on the Qq page of Michael’s ABC bird book I read to him when he was little. I’ve waited 25 years to see it and never really expected I would. I only have this lousy phone photo, I had several great views of a couple of them through my binoculars. Look at the bright blue spot in the center. Then look it up on the internet to see how beautiful they really are.

After the tour, we ate lunch at a restaurant that attracted the birds by putting out bananas. It finished off a great tour with 4 more bird sightings.

He took off singing “Amazing Grace.” 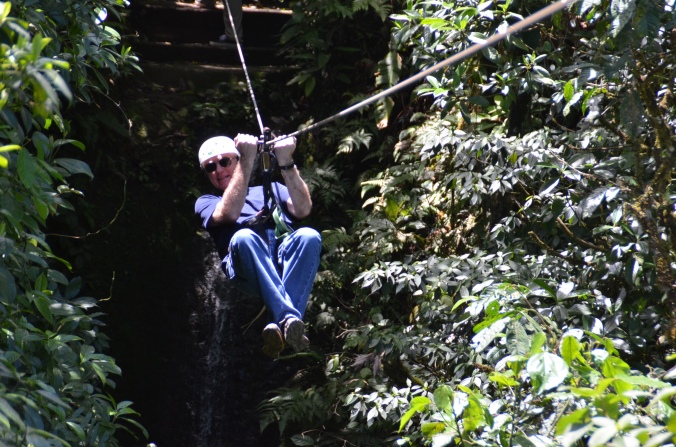 The next day, we proceeded north to Arenal Volcano. 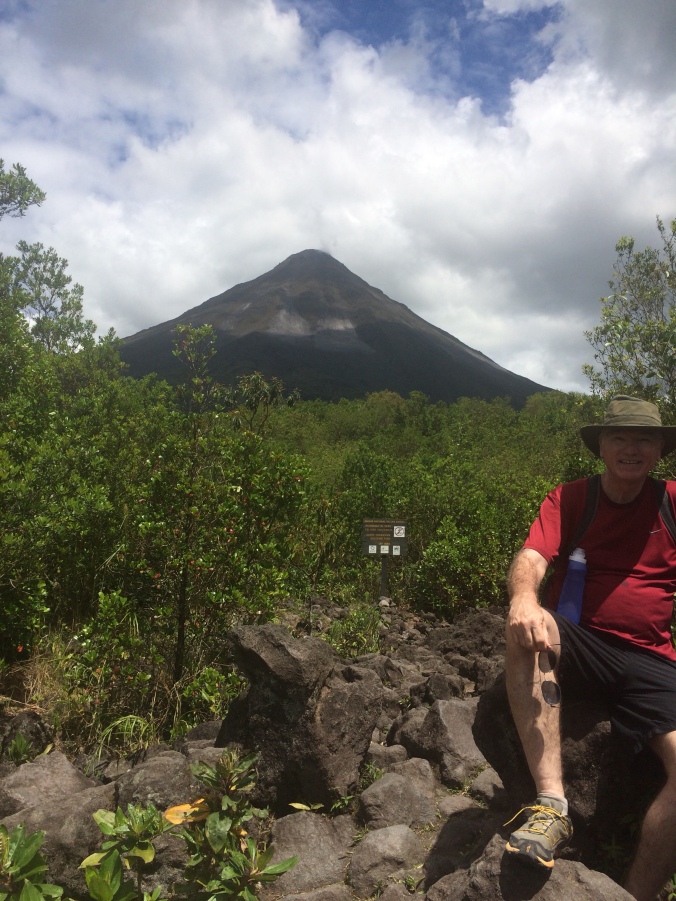 The volcano was on one side and a lake on the other. 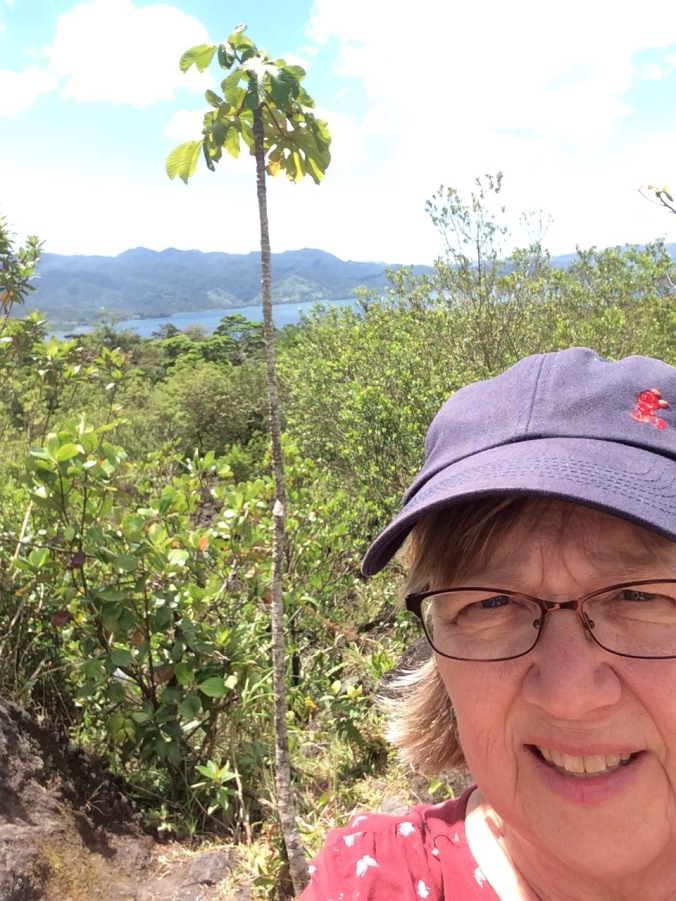 AND we saw another lovely bird!

Our reservations for the night were 3 hours away, so we got back in the car and headed south. Ex-pats also like the small town of Atenas, so we stopped there at Eden Atenas, a lodge in the jungle run by a couple of original hippies. They recommended a pizza place for dinner, but we wanted to enjoy the view from the lodge, so we ordered take out. I also wanted a Fanta orange, but the glass bottles could only be sold to customers eating there. I could buy a plastic 2 liter if I’d like. I offered to pay the deposit on the bottle, but no, the rule wasn’t written for that. Then I suggested that if they had a paper cup, I could buy it, empty it in the cup, and leave the bottle. The young man was very impressed with that idea and I got my soda. I’ve noticed that sometimes people don’t think outside the box very well.

Quepos was our next destination. We stopped at Jaco to check out the beach and water temperature, which was really warm. 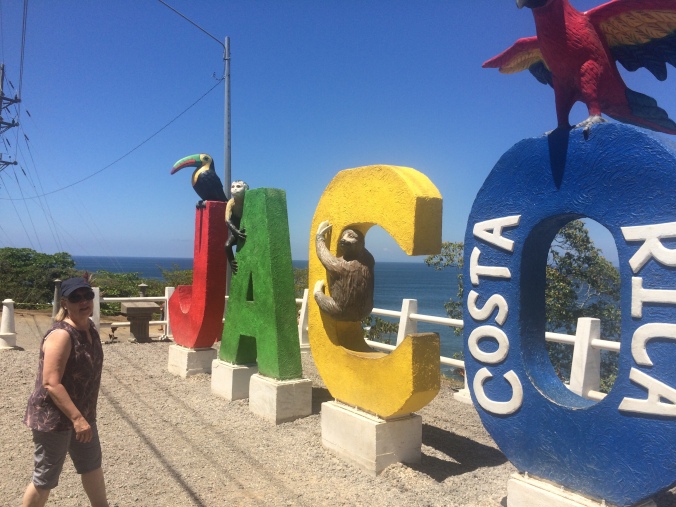 La Foresta Hotel had a wonderful pool heated like a bath tub. While we were enjoying the rest, a chestnut-mandibled toucan flew into the nearby trees. Two of them flew around the edges for awhile, long enough for me to get my binoculars and have some great viewing. But, I forgot to get a picture of them until later when he was farther away.

For the morning tour, I had signed up for a truck ride to Nauyaca waterfall. Only 3 of us were riding in the truck and the other dozen were horse back riding. Norris asked if he could switch transportation, and was granted a horse of his own. 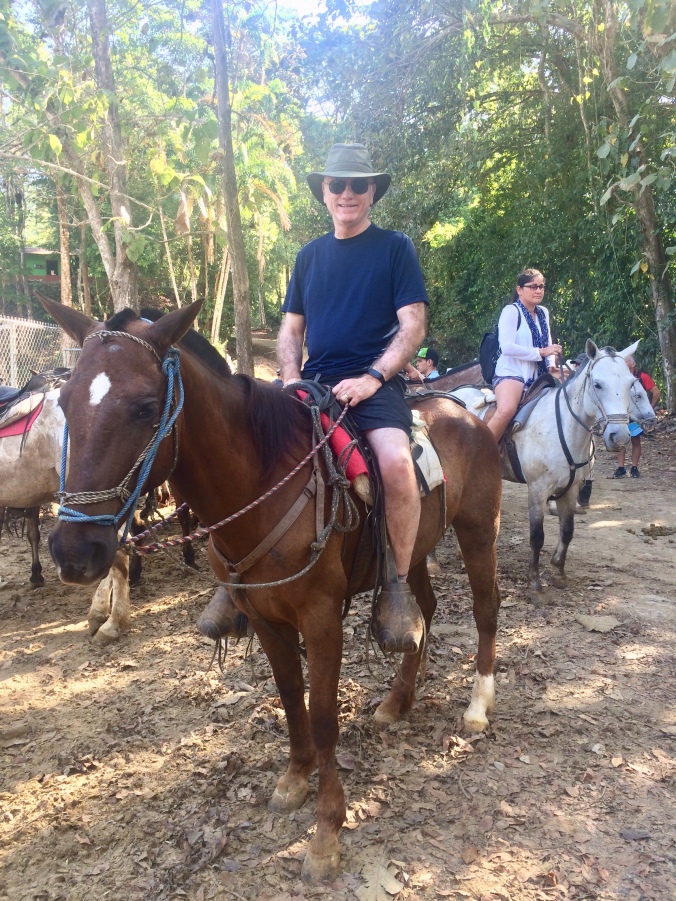 The top half of the falls. 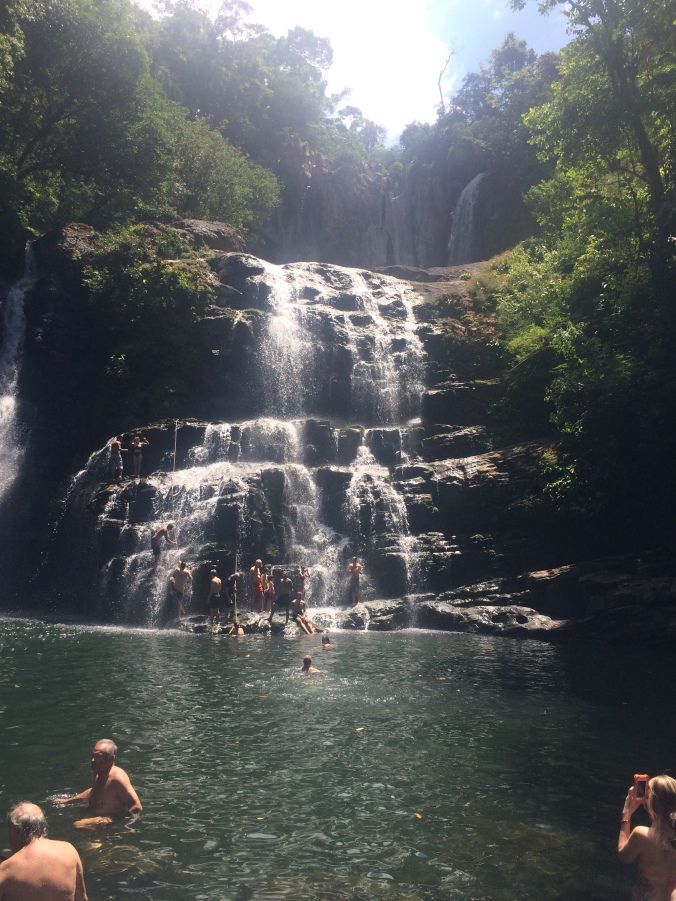 Norris is there on the rocks, helping people up with the rope.

On the way back from the falls, we had lunch at a roadside restaurant. These macaws were there, and the toucan. They’re tame, but not caged or kept there in any way. And it was cool to have such a close up look.

We left Quepos with some nice memories and spent our last day at Manuel Antonio National Park. When we pulled into town, we were guided into a parking area and right away a man came up and suggested we use a tour guide. I hadn’t even seen the official gate yet, but we decided to go with it. There were guides all over the place with small groups of 3-5. Our guide was knowledgeable and showed us everything we were hoping for, so we did fine, but we were a little worried at first. 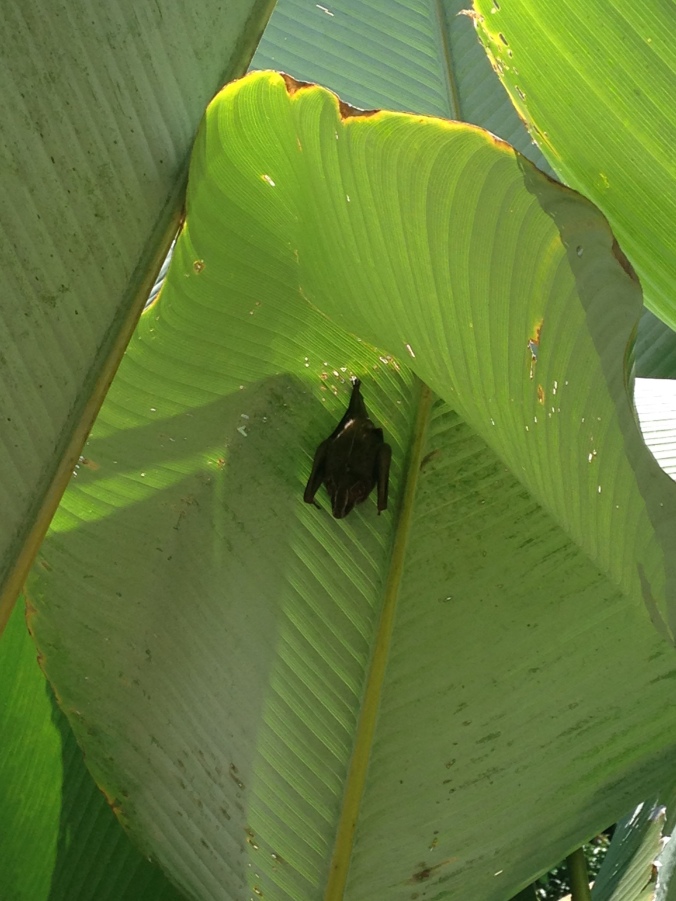 See the bat? I wouldn’t have without the guide. 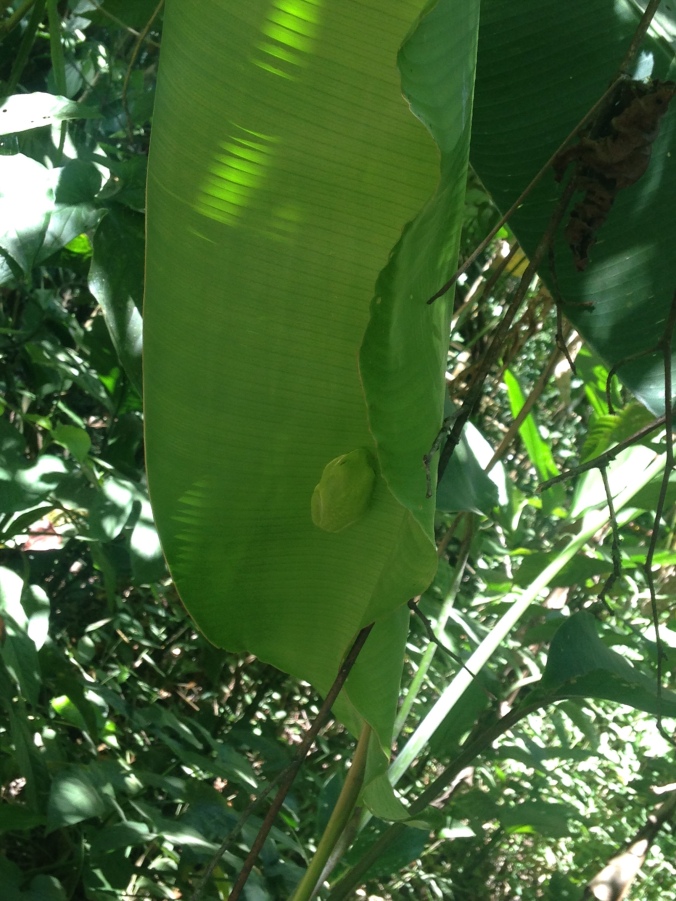 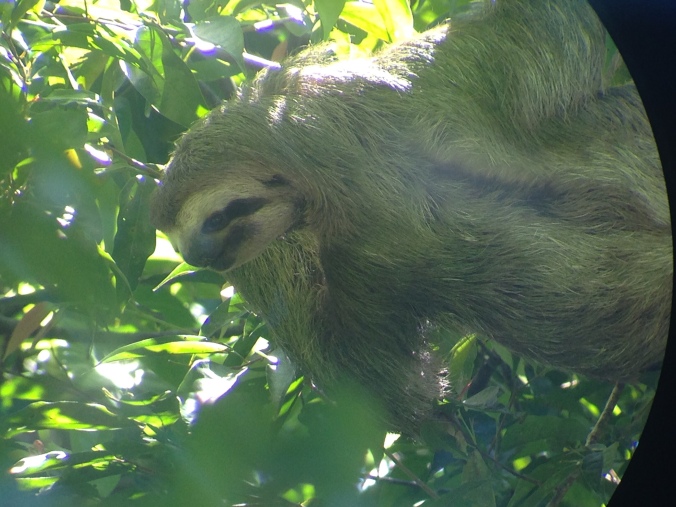 I could see the sloth with my naked eye, once it was pointed out to me. But this picture was taken through the telescope. This next one was a 3 toed sloth which is more blonde colored. I tried and tried to find it but could only see it with the telescope, which is how this picture was also taken. I tried so hard to see it on my own that I lost my group who had gone ahead of me.

See the frog? Another telescope picture. 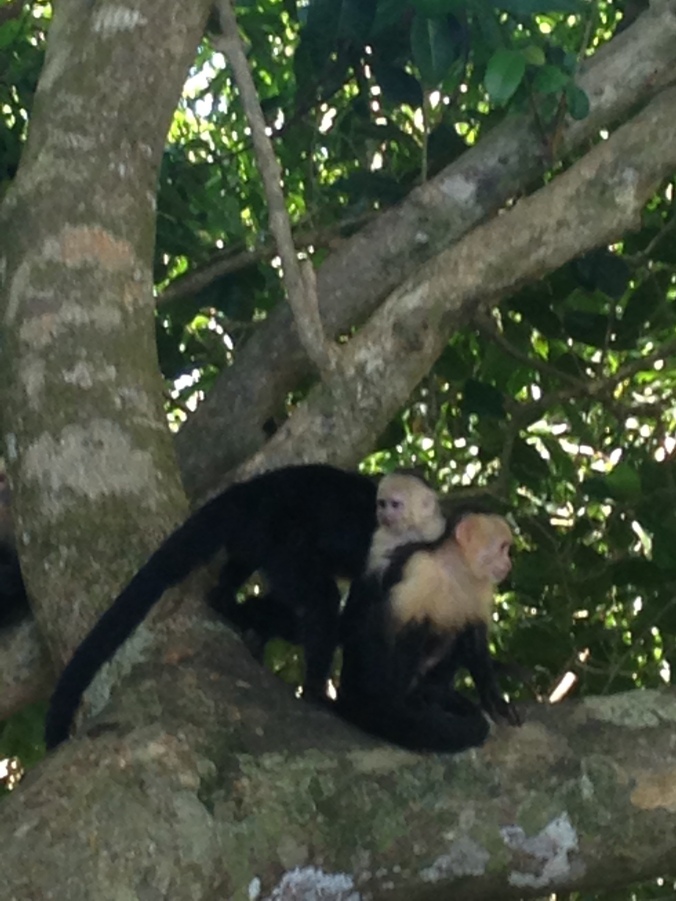 Monkeys and raccoons were thieves at the beach. Our bags were checked at the entrance to make sure we didn’t have cookies, candy or other unhealthy food that the animals might get a hold of.

I guess he can’t read. I was so hot and sweaty from the trek through the jungle that I couldn’t wait to jump into the ocean. I was so uncomfortable that I was irritable and cranky. The cool ocean water calmed me down for the 2 hour drive to our hotel in San Jose.

Our Costa Rica trip ended at the City Mall near the San Jose Airport. It’s the biggest mall in Central America with 200,000 sq. meters. We went because we were ready for a little more commercialism and a little less wildlife. And I found a Taco Bell for dinner! 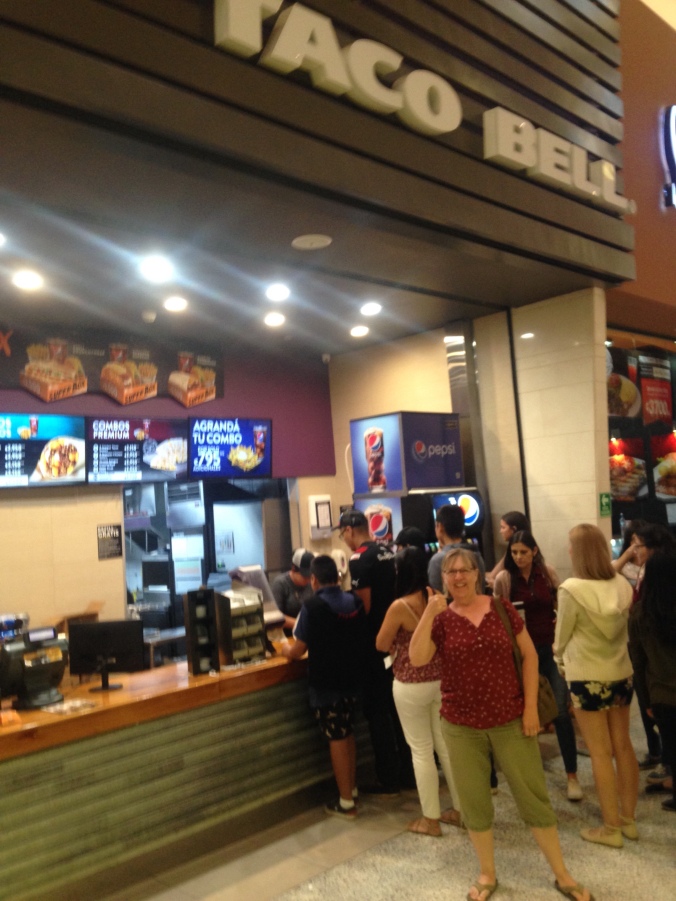 3 thoughts on “Costa Rica on our own”