Sightseeing is the least of what we’re doing here. Mostly, we’re helping Sara with her non-profit organization, the Chispa Project. It involves organizing, labeling, and distributing books to create libraries. http://www.chispaproject.org 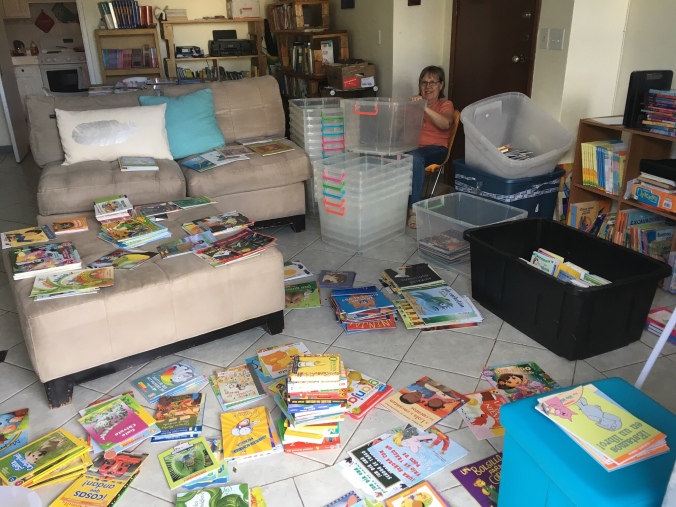 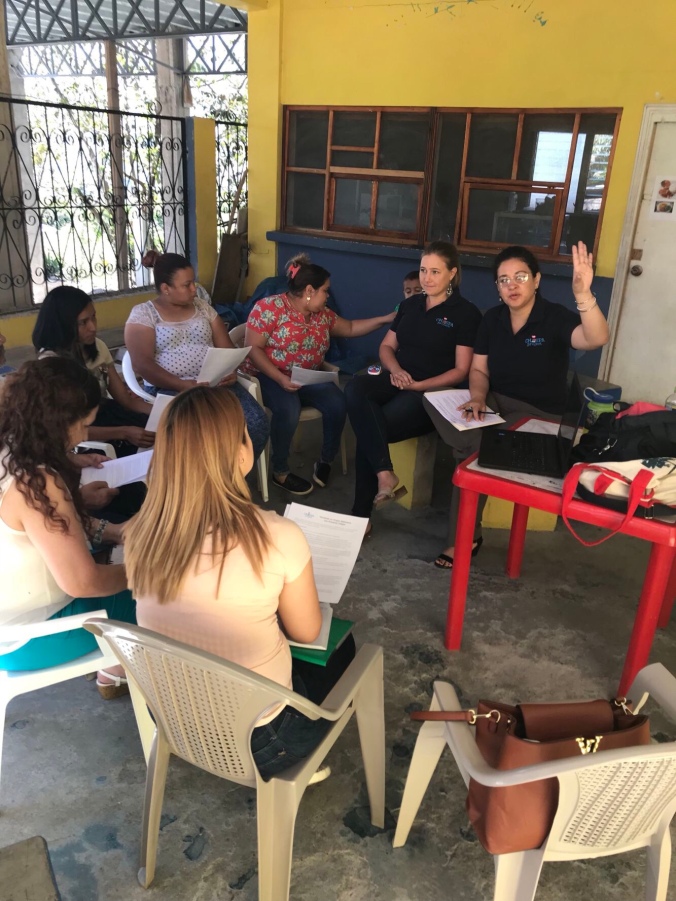 Sara and her team talk to the parents, teachers and school director to set up a contract for the library.

Then Norris gets to pack the car so that everything fits, including the 4 passengers. Today, we’re carrying books, book shelves, paint cans, the activities for the fair, and of course our back packs full of clothes. 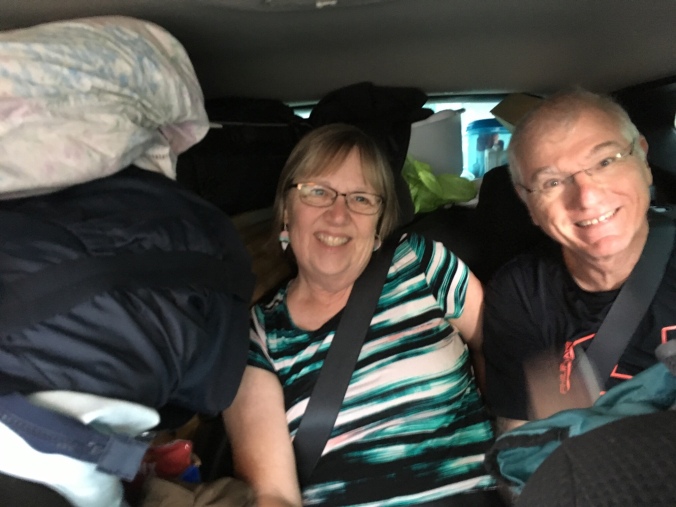 Our first stop is a bilingual school in La Esperanza about 3 hours out of Tegucigalpa. It has an American vice principal and is larger and more organized than many of the schools Sara works with. 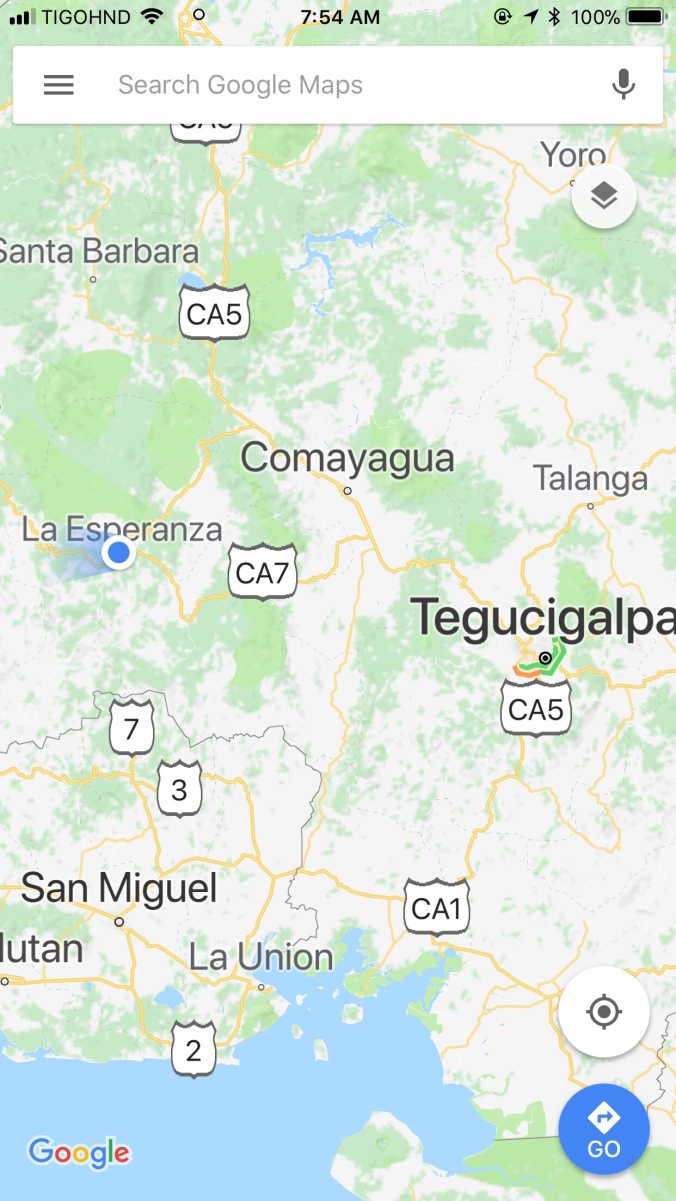 After all the sorting of books at Sara’s apartment, we bring them to the schools in tubs. The first step on location, though is teacher training. Sara has a workshop to instruct and encourage the teachers to include the picture books in their lessons, and generally how to have a class or school library.

This school already had a library in place, but needed updating and instructions on getting the most out of it. So, the next step is to work with the librarian (or teacher) in organizing the books for their location. Since this is a school library, the books had to be numbered and labeled as Spanish, English or bilingual. Several students dropped in during the day to help with the process. Sara is talking to her co-worker, Teresa, at the library. 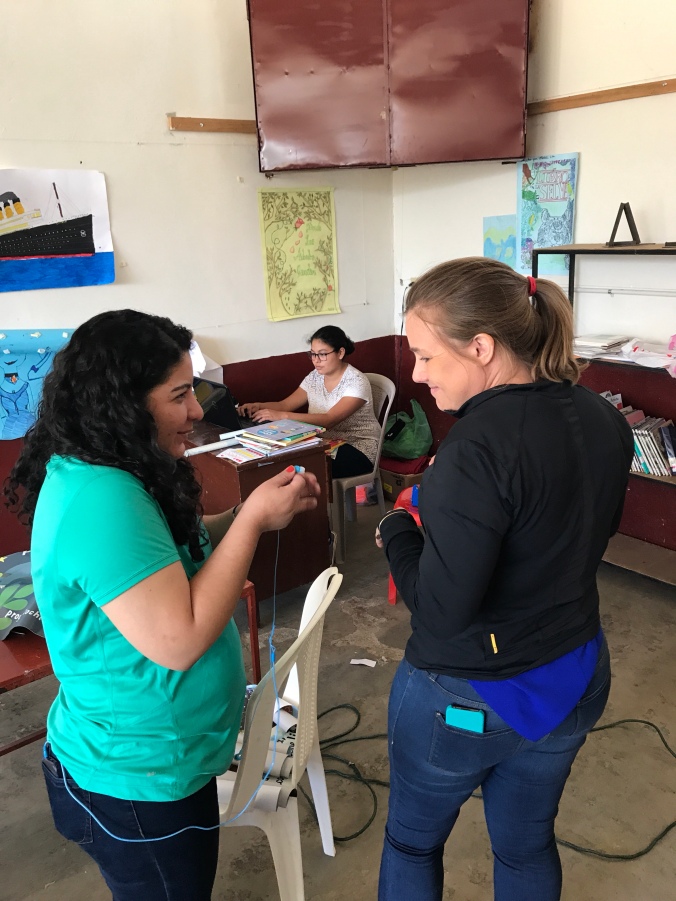 The students were very interested in the book selection. One boy chose Moby Dick and announced he planned to check it out first. The younger volunteers were shy and giggly about having their picture taken.

Sara also offers a mural to create a reading space in the classroom. Here, the library had room for the whole outer space mural. A friend of Sara’s drew several pictures for her to use and this one was projected on the wall for us to trace and paint. I had the honor to paint most of it since everyone else was busy with the books.

The next week we went to an orphanage an hour out of the city. Here, there is an active clinic, surgery center, the orphanage for 260 kids, a school, and a senior home. The school has a library, but because of the scarcity of books, the librarian prefers the books are only used at the library. So, Sara is setting up a rotating system of 18 boxes of books of different titles. Box A will be in one casa one month, and then move to the next casa, and Box B will move to the next casa, and so on. Each box has 50 books from beginners to advanced, all in Spanish. Each house needs a reading corner, so we painted (with the girls doing most of the work this time) 6 smaller murals and will finish another week. While the painting was going on, Norris catalogued 100 books. He had to enter the number and title of each one, and one 12 year old, helped out by handing him books, putting them back in order, and reading aloud to him (in Spanish).

The final step of the process is the Inauguration Day. Sara provides materials and ideas for a book fair and students, and volunteers run the stations. I got to help tell the rules on how to treat books, using my puppet (from high school days) that I had passed on to Sara. This picture is about the rule not to eat or drink in the library and Lucia “spills” the water from the cup all over the audience. It was so much fun! 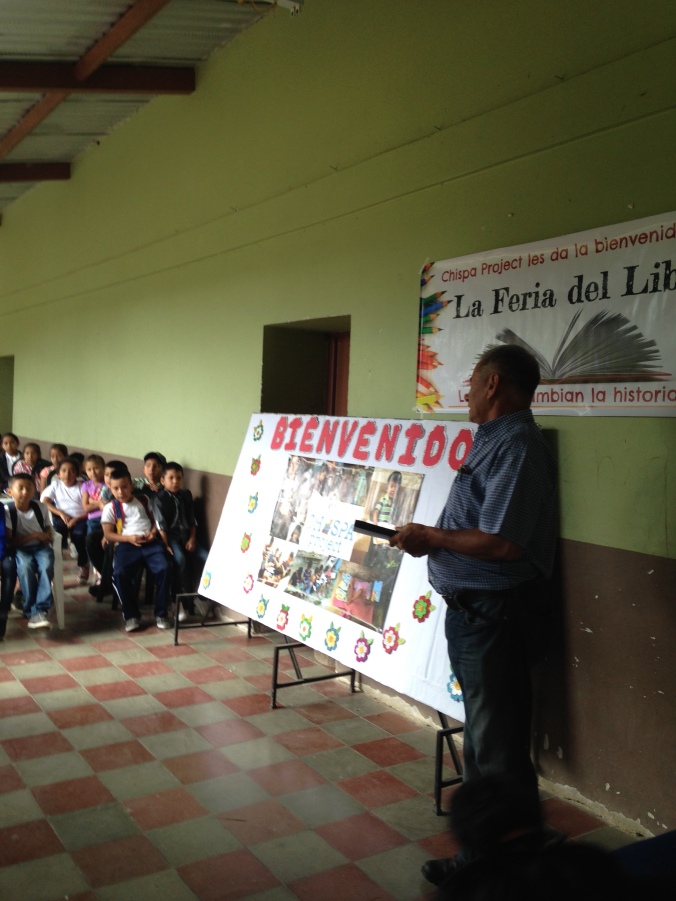 At this inauguration the mayor explained to the students how different it was when he went to school and there were no books for a library.

And of course, any celebration titled an inauguration has to have speeches. The principal had a long speech thanking every single person involved in the process, a school district official spoke, and Sara was awarded a clock with a picture of her and some of the students. The high schoolers also read an essay and a poem and gave a skit about the importance of reading.

But the hugs make it all worth it!