Everyone said to visit Beaulieu (Bew-ley, even though it looks French.). We didn’t think we’d be that impressed with a car museum, but this was really something.  There was a large collection of race cars, motorcycles, and old vintage cars.  It all started with Lord Montague’s personal collection.  Also, on the grounds was a building full of vehicles from Top Gear, a British show that makes unlikely motor vehicles.

This barely shows the size and scope of the museum.

At the Top Gear exhibit, there was a car for Senior drivers. It had an ipad for the GPS, recliners for the back seat, extra large rear view mirrors.

Inside Lord Montague’s palace, on the estate with the car museum.

I wouldn’t want to be responsible for a household of this size. Especially when they all had bells. 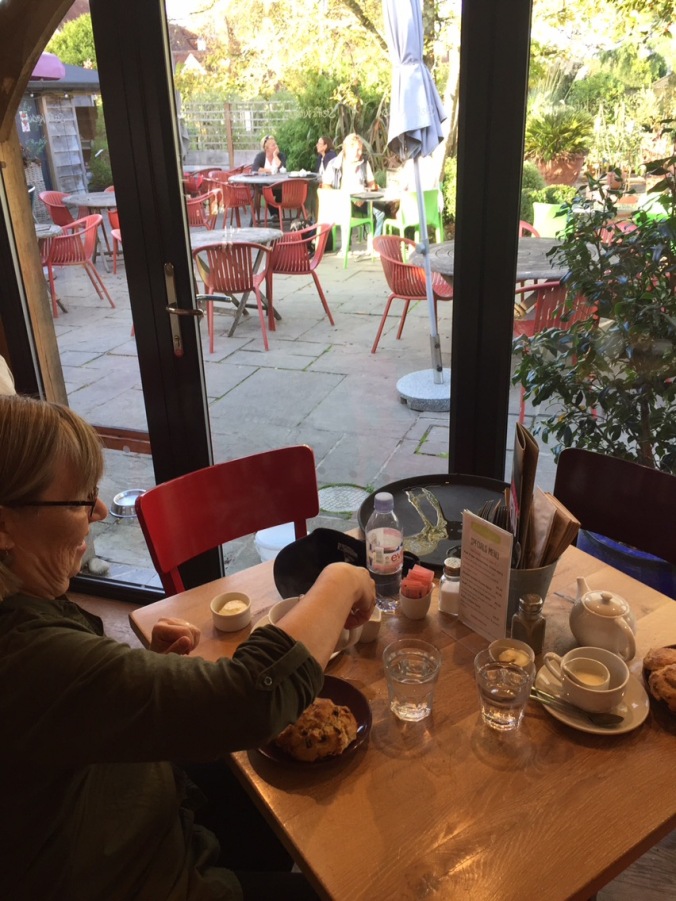 We were advised not to leave without having Cream Tea. It is tea with a scone, and heavy clotted cream. It looks like butter, but you really have to pile it on to taste it.

The next day, we took a train an hour away to Portsmouth.  Here were the Historical Docks with museums and ships to board and explore.

First we went to the exhibit of the Mary Rose.  This was King Henry VIII’s favorite ship.  It was sunk in battle and excavated 400 years later.

The clinic on board of the “Victory” ship. Norris is on a surgeon’s table that is double wide. One side for the patient being operated on, and the other for the next one, being prepped.

The displays were well done, and each of the three ships that we went aboard had different ways to tell the stories.  I preferred the one with the listening device that told of a battle and had a specific route to walk through the ship.  Unfortunately the captain died in that battle.  Another ship was open for exploring at your own whim.  Upstairs, downstairs, through the left doors, or the right doors.  By the third ship, though, we spent a little time on the top deck, and glanced briefly at the small areas that were open for observation.  We hope to go back to Portsmouth, because we didn’t get to take a ferry on the harbor, to the sub museum.